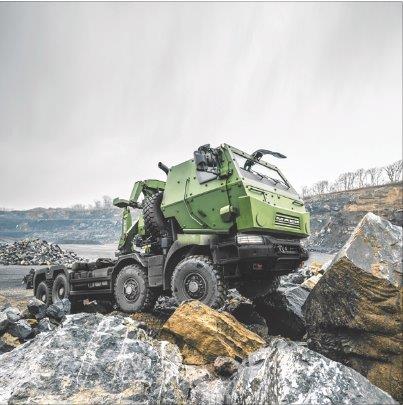 The Canadian Armed Forces will start receiving the first of its new standard military pattern (SMP) trucks by the end of this year.

The SMP trucks are coming from Mack Defense, LLC. “The final delivery of the SMP trucks is expected mid-2019, with the project conclusion in 2020,” Department of National Defence spokeswoman Jessica Lamirande told Esprit de Corps.

Vehicles will deliver in five variants — Load Handling System, Mobile Repair Team, Cargo, Cargo with Crane, and Gun Tractor — from Prévost, located in Saint-Nicolas, Québec to Canadian Armed Forces bases across the country over the course of the next few years, added Lamirande.

The SMP is the last component of the Medium Support Vehicle System (MSVS) project, which is a multi-phased project that, besides SMP, is composed of following:

Kitting of 846 of the shelters; kitting is completed.

DEW Engineering and Development has played a significant role in the MSVS program. In December 2016, Defence Minister Harjit Sajjan highlighted the delivery of the last mobile workspaces from DEW Engineering for use by the Canadian Armed Forces as medical and dental clinics, workshops, field kitchens and command posts.

The mobile workspaces or “kitted shelters” are equipped with items including workbenches, electronic and office equipment, power generators and tools, the Canadian Armed Forces pointed out. The equipment (kitting) transforms the shelters, which are container-based workspaces that provide environmental protection, into functional units providing crucial support services.

The new mobile workspaces from DEW were bought as part of the MSVS project, which aims to modernize the military’s fleet of logistical trucks and mobile workspaces. They were delivered on time and on budget, the Canadian government pointed out.

DEW Engineering was contracted to deliver a total of 994 (plus one prototype) baseline (empty) shelters. Delivery was completed in February 2015. DEW was also contracted to deliver 846 kits to convert the empty shelters into functional units. Total value of contracts awarded was $233-million, the government noted.